A successful year 2015 for the aikidoka of the TG Münster

The aikido group of the Turngemeinde Münster was formed two years ago by David Ross (4th Dan, Shidoin) and Gabriele Bixel (3rd Dan, Fukushidoin). Looking back on 2015 we are happy that we had a very successful year.

In January we participated in the traditional New Year’s Reception of the TG Münster. We performed an aikido demonstration to introduce various aikido techniques. Our focus was upon basic and dynamic techniques, which are respresentative of the aikido curriculum. A few months later, after intensive and detailed preparation, Katharina Ritter and Simon Hannibal successfully passed their 4th and 5th  kyu tests in April .

In addition having classes on a regular basis three times a week, we also travel and attend aikido seminars to train with aikidokas from many other dojos under the guidance of internationally highly recognized aikido instructors. The highlight was the summer camp in August with Yamada Sensei in Bernau at the lake Chiemsee. We had a very intensive week of aikido training with the opportunity to train with Dan ranks from all over Europe and the United States under the guidance of Yamada Sensei. Traditionally on the last day of the seminar Dan tests are held by Yamada Sensei. Gabriele Bixel had the opportunity to test for Sandan. A good time was had by all on and off the mat. Weather was nice and sunny, we spent the time swimming at lake Chiemsee and hiking in the mountains of the Chiemsee area.

In the autumn months we returned to our regular training at the dojo to deepen our understanding of the basic techniques and movements. Recently we included weapons training into our aikido curriculum. Many aikido techniques are derived from weapon attacks and regular weapon training teaches concentration, timing, distance (mae) and posture.

For the upcoming year 2016 we will pariticpate again with an aikido demonstration at the New Year’s Reception of the TG Münster in January and we plan Kyu tests in April. We are looking forward to upcomimg future seminars with  Yamada Sensei in Brussels and in Bernau. We are also planing to attend seminars with Hayato Osawa Sensei (7th Dan, Shihan) and Donovan Waite Sensei (8th Dan, Shihan).

For all those of you,who are now asking: what is aikido?

Aikido is a Japanese martial art developed by Morihei Ueshiba often referred to as O’Sensei. Master Ueshiba developed Aikido as a synthesis of his martial arts background, philosophy, and spiritual beliefs. When asked what aikido is the Founder would reply “The Way to harmonize heaven, earth, and humankind.” Aikido is often translated as a way to connect or unify oneself to the creative life force that surrounds all of us in our everyday life.
O’Sensei’s goal was to create a martial art that would enable one to defend themselves while also protecting their attacker from injury. The aikido practitioner executes an aikido technique by blending with the motion of the attacker by re-directing the attack rather than opposing it head-on. This requires very little strength and effort as the aikido practitioner begins to lead the attacker’s momentum using entering and turning movements. The Aikido techniques are completed by a variety of throws or joint locks.
In aikido we draw the opponent into our own sphere of movement in order to guide them and resolve the conflict in a peaceful manner. Opposition must always be reconciled to create something of beauty. Aikido is a martial art based upon the concept of Budo. Although Budo has many meanings the element of bu translates as a way to stop violence – to bring about peace or as O-Sensei often states a way to reconcile the world – loving protection for all.

We are always happy to see new faces in the dojo. Beginners who are interested in aikido are most welcome to join and explore the dynamic world of aikido. 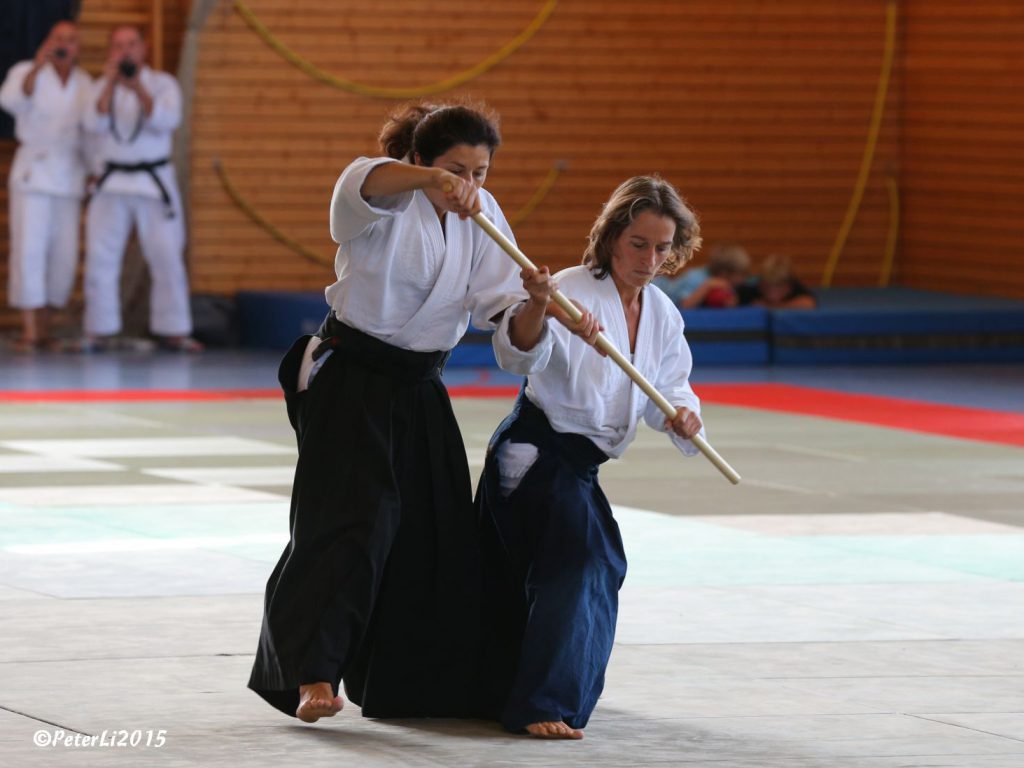 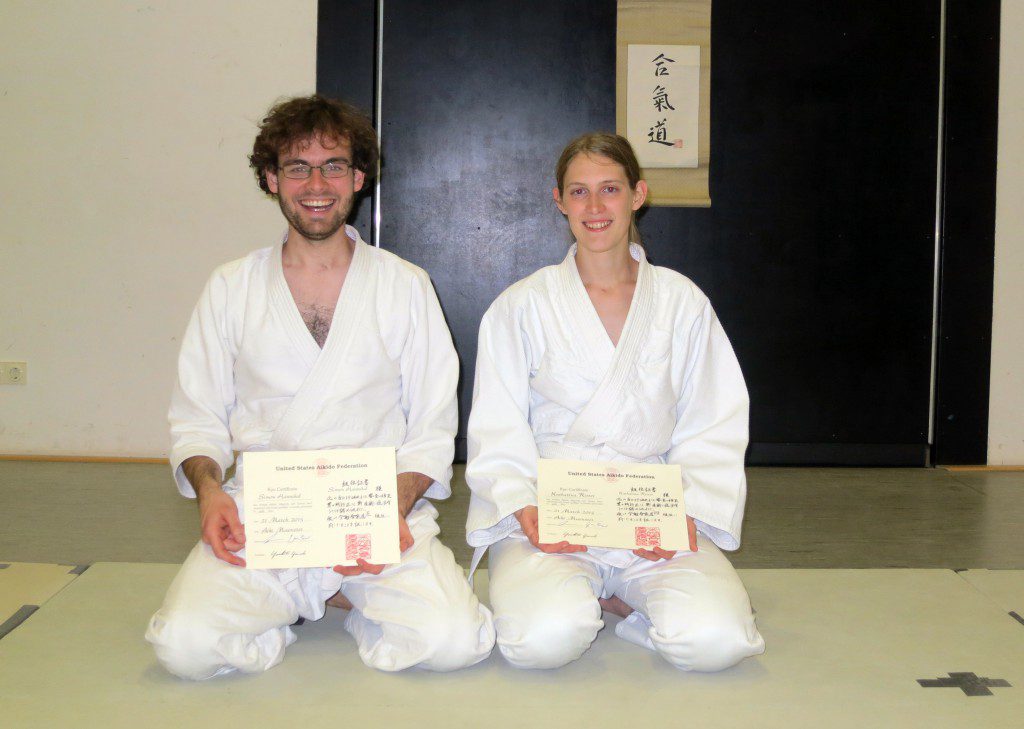 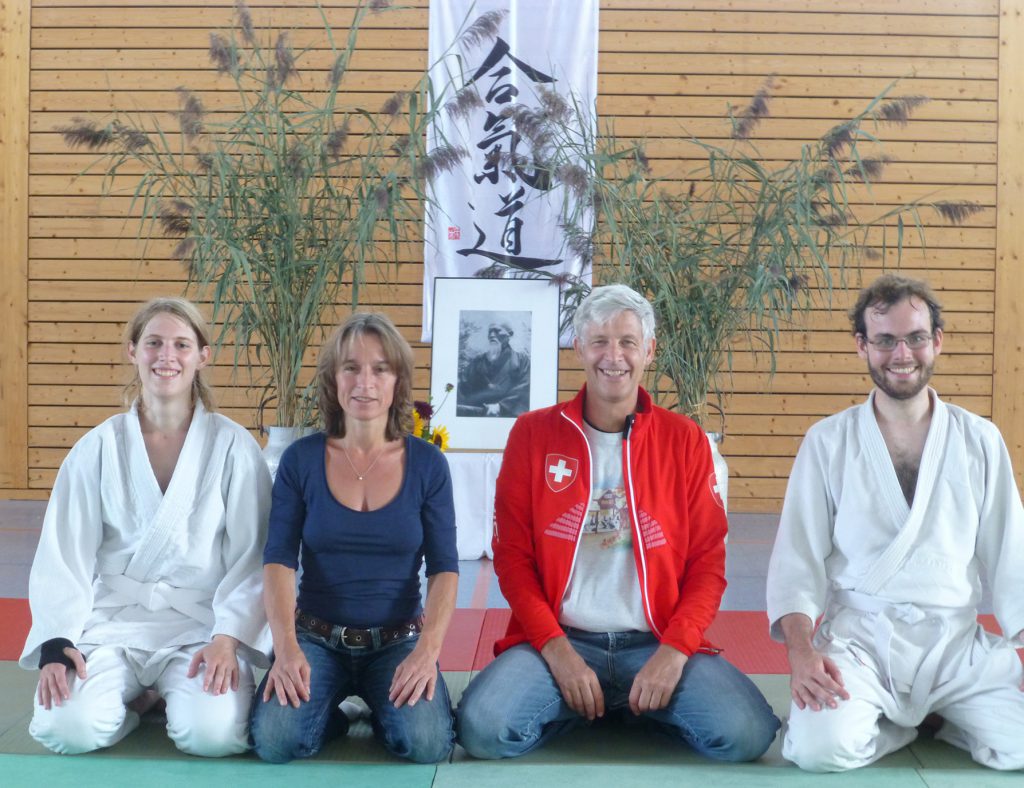 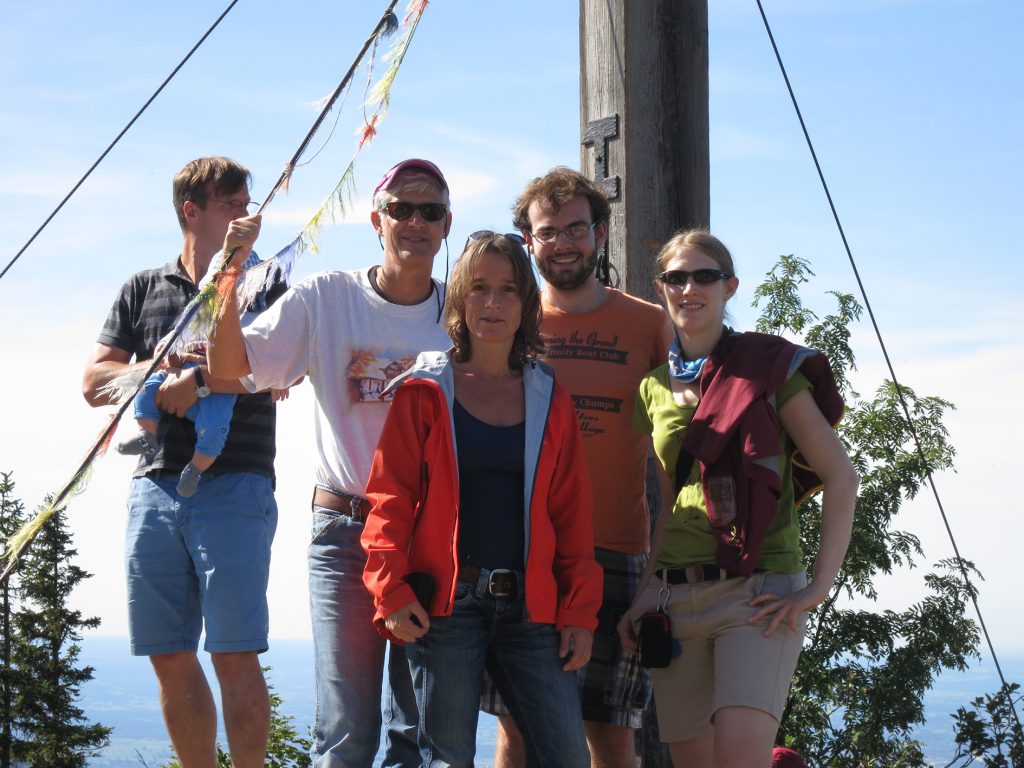 Hiking at the Kampenwand during summer camp in Bernau at the lake Chiemsee: David Ross, Gabriele Bixel, Simon Hannibal and Katharina Ritter (from left)